Giants in the Labyrinth

The following figure shows the possible states, and some actions that take the figure to other states. The "standing" state obviously has many other actions which are not shown.

The biggest change to the standard rules, is the fact that "crawling" is considered an action, which is like moving up to MA=2, but only if the figure is in the "prone" state. Standard rules consider "crawling" as a state itself, but when I rationalized it, crawling is more of an action only possible to prone figures.

Attach:figureStates.jpg Δ (I still can't get uploads to work on the Wiki, so I've linked to a file on imageshack.us below)

The imageshack link above is invalid. I couldn't find the original image of the state machine :-(

So, I tried to recreate it as follows: 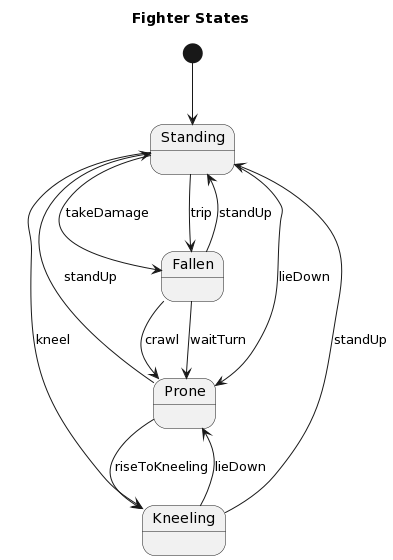